Out again with Ed, this time to Schofields, north-east of Sydney, to look for Swift Parots that had been reported there for a few days previously. On route to the site, a few large flocks of Sulphur-crested Cockatoos were lining the roadside. After arriving at the site, we could hear Bell Miners with their odd ringing call and a group of around twenty Cattle Egrets were in a field. Ed played the call of the Swift Parrot to give an idea of what to listen for, which sent up a flock of Common Starlings and House Sparrows from a neighbouring garden. A Noisy Miner decided to take a look at us and see where the noise was coming from. While sorting out kit, a Collared Sparrowhawk flew up from long grass to eat a small bird on a fence. One of the Bell Miners gave us a good view and we also saw a Common Blackbird, Willie Wagtails, Superb Fairy-wrens and Spotted Turtle Doves.
As we walked down the road, a White-plumed Honeyeater was inspecting a gum tree and a flock of Dusky Woodswallows soared overhead. A large flock of Straw-necked Ibis flew past at a distance. While looking for a flock of lorikeets that had flown past us too quickly to identify, we were met by two more birders we had arranged to meet. The four of us went to look for the Swift Parrots. A little further down, we saw Scaly-breasted Lorikeets fly over. A few Galahs were present and a large mixed flock of Starlings and Red-rumped Parrots were feeding in a garden with some Magpie-larks A strange parrot-like call was heard, which wasn’t recognised at first, but eventually placed to an aviary of Rose-ringed Parakeets in a garden. A large flock of Chestnut-breasted Mannikins were in some shrubbery and let us have a look at them. A few Eastern Rosellas were also present.
So far, no sign of the Swift Parrots and the light was almost gone. As we made our way back to the cars, a Black-shouldered Kite flew over.
We left for the second part of the trip – spotlighting at Mitchell Park, a few kilometres to the north. The site is good for quite a few birds in the day, but also for night birds and mammals after sunset.
Not long after entering the park, Ed caught sight of several pairs of glowing eyes, reflecting the light of his torch, which turned out to be a family of Ring-tailed Possums - an adult and two young. Another adult was also there. Nearby, high in a tree, was a Brush-tailed Possum. A few Swamp Wallabies were crashing about, although we didn’t see them. Ed was interesting in seeing Yellow-bellied Gliders, so we went further into the park. Further down by a bridge, we found another Ring-tailed Possum, quite close to us. 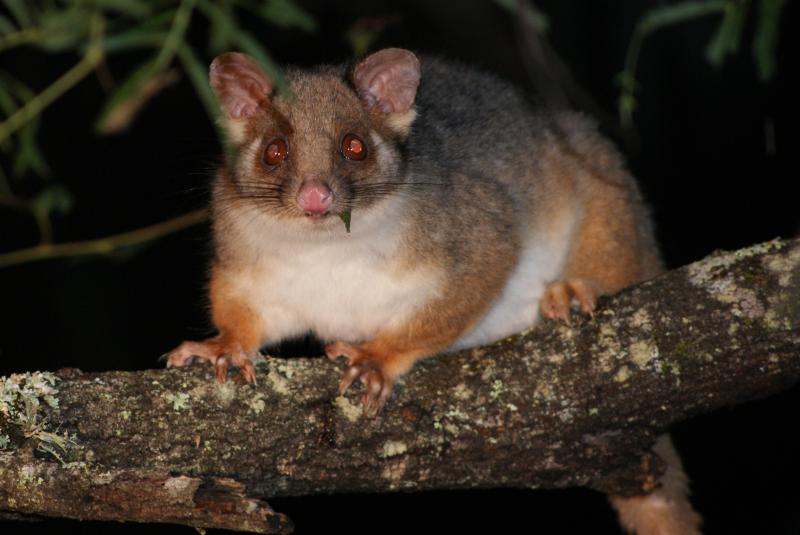 No sign of any gliders, so we walked back down the track. We did find a patch of gum tree where the bark had been bitten to expose the sap, which gliders feed on, but no glider, despite twenty minutes of searching. However, there was another Brush-tailed Possum eating leaves only a few metres from us. 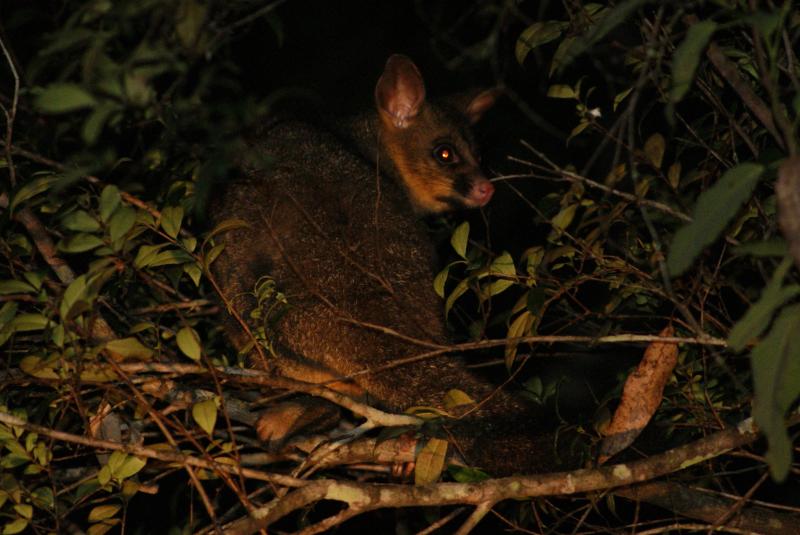 Further on, two Tawny Frogmouths were perching above the road. I was particularly happy about this as I had wanted to see one and not managed it until then. They were both unfazed by the light or our presence and just looked at us as we took photos.

The only other creature we spotted on the way back was a rat of some species, but at the car was another Brush-tailed Possum.
A pretty good day's birding with three lifers, (plus one introduced), one year tick and two new mammals.